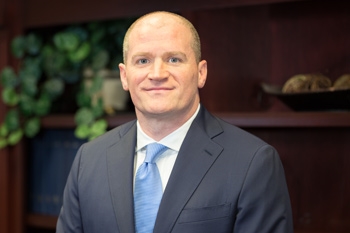 Scott McGimpsey was born in Bayonne, New Jersey in 1973. He is the youngest of nine children. His father was a warehouse manager and his mother was a housewife. Needless to say, 11 people living on a warehouse manager’s salary was a challenge. Scott never thought of himself as living in poverty yet will readily admit that things were very tight when he was growing up.

“I never thought of myself as poor. Somewhere during my personal journey in life, I came to believe that poor is a state of mind that can be accepted or rejected. The psychologist Carl Jung said “We are not what happened to us, we are what we choose to become”. That is not to make light of not having money. It can most certainly be tough and I have experienced what it is like not knowing where your next meal is coming from. I have lived that life. I have lived through times of great personal insecurity, but I always had faith that better days were ahead. I believed and continue to believe that with work and planning we can make our lives better. The worst form of poverty is that poverty that comes from not having hope. A lack of hope usually comes from a lack of vision and planning,” he said.

The Bayonne of Scott’s youth was a hard scrabble town of longshoreman and other primarily blue collar workers, people who labored honestly, many involved in the myriad of jobs stemming from the coming and going of ships into and out of the New York Metropolitan area.

The city might best be known for former heavyweight boxer Chuck Wepner, the working class guy known as the “Bayonne Bleeder,” who went toe to toe, for 15 rounds, with then champion of the world Muhammed Ali. Wepner is said to have served as Sylvester Stallone’s inspiration for the movie Rocky. Though in more recent times Bayonne has gained attention as the birthplace of George R.R. Martin, author of the HBO hit Game of Thrones.

Scott tells us, “I was a little kid when Wepner fought Ali. However, as I grew up I came to know more and more about him. He kind of embodied the spirit of the city, this notion that with guts and determination, you can raise yourself up, even beyond your own expectations.”

Scott always had two passions growing up, books and sports. He was and still is a voracious reader. As for sports, today Scott is a competitive tennis player, who still participates in tournaments. But once upon a time, it was boxing that caught his attention.

“I am still a boxing fan, but I no longer box. When I was a kid, I joined the Bayonne PAL (Police Athletic League.) I trained in boxing under a gentleman who was a good friend of Chuck Wepner’s and, in fact, was his sparring partner for the fight with Ali. His son, who was a professional light heavyweight boxer and is a boxing trainer today, continues to be one of my best and oldest friends.

I loved boxing, seeing it as a sort of kinetic game of chess, where it is important to be offensive and defensive at the same time. In the game of tennis, I find the same thing to be true. And when it comes to the financial world, I have seen this same theme play out. We have to look for opportunity, while protecting ourselves – in a variety of ways – against risk. Though we might work to protect ourselves from risk, just like in boxing and tennis, risk is always present and cannot be mitigated 100 percent. But it is up to us to do our best.”

Boxing gave way to tennis for Scott. And school gave way to work. Scott worked in construction, as a painter and in a variety of physical labor jobs. However, he had the vision to seek out more.

“Across the Hudson River is New York City. And in it, downtown, this place called Wall Street. It was right across the river from me. A short ride or ferry trip away. I had been interested in how the economy worked and how individual industries were built. I also believed, from my reading, that investing was one of the key tools that could allow an individual to live the American Dream. The American Dream does not dream itself up. You have to work for it. You have to believe in it. You have to have the vision and planning to go for it. I read once that success does not come to you, you go to it- so I took a trip to Wall Street and applied for a job as a stockbroker.”

“I have a lifelong friend whose father was a Captain in the New York City Police Department. He was also a Captain in the United States Navy Reserve. He earned a good living but his income was not extravagant. And yet, by the time he passed on, sadly many, many years ago now, he had an investment portfolio valued in the millions of dollars.” Essentially, he became a multi-millionaire on a cop’s salary, all while keeping a roof over his family’s head which included his wife and six children. Seeing firsthand the kind of result that is possible through disciplined planning inspires me to help people build their fortunes.”

Scott got a job on Wall Street as a broker trainee. He became licensed Series 7 and Series 63 as a registered representative and began working with clients. Early in his brokerage career, he was called up by the Bayonne Fire Department for a paid position as a firefighter. Scott had applied years earlier for a variety of civil service positions.

Scott McGimpsey loved the world of Wall Street. At the same time, the idea of helping people as a firefighter appealed to him. “I was early in my brokerage career, in my twenties, and the idea of saving people from disasters or just distress appealed to me. I cannot say why exactly, maybe growing up I felt vulnerable and did not want others to experience that, at least not if I could help it.”

Leaving brokerage for a few years, Scott realized that he missed helping people protect themselves and their families through the building of strong investment portfolios. He yearned to go back to that.“As a firefighter, I was working two 24 hour shifts a week. Essentially, if you didn’t require much sleep, enough time was left available for full time work. So, after three years away from Wall Street, I returned. Now, I was in a position to work toward helping people both physically and financially.” That was 15 years ago. Scott has never looked back and today works full time in the financial services industry. He is also a Captain in the Bayonne New Jersey Fire Department.

Scott’s commitment to helping people is not simply limited to his work. For example, “On September 11th, 2001, when the World Trade Center was attacked, the desire to do something was automatic. The World Trade Center complex was an integral part of the Wall Street area, a neighborhood that had become my home away from home. It was also right across the harbor from Bayonne.”

So on September 12th, 2001, Scott and many other members of the Bayonne Fire Department made their way to ground zero, to work as volunteers, shifting through the still steaming rubble, in an effort to find survivors.

“I speak for us all in saying that I went to ground zero because I felt I had to and despite the many painful memories, I have always felt honored to have been able to help. I specifically remember seeing hundreds of photos strewn among the rubble and realizing that each one of them likely represented a family that would be forever changed. My take away from this tragedy is that unexpected things can happen in life and that preparation is better that being caught off guard. I work to incorporate this very difficult lesson into my outlook on investing. I also realize, that try as I might, nothing I ever do will be perfect, but my intention is to balance vision and preparation with reasonable risk management. ”

Scott McGimpsey lives with his wife Tracey, and their four children, in Middletown, New Jersey. He is the president of Unified Planning Group.